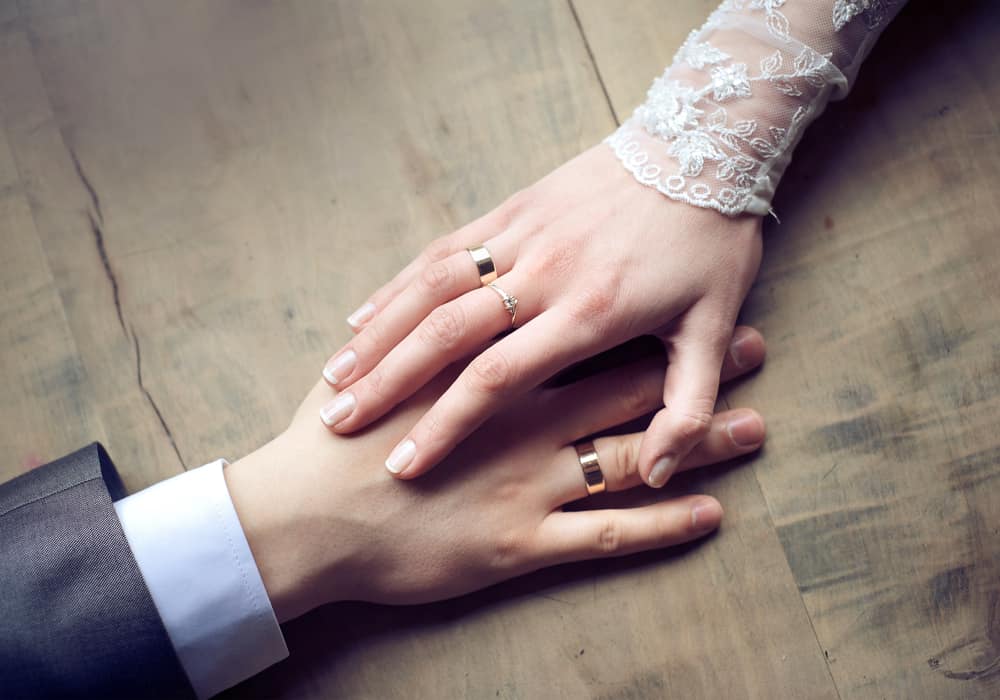 A lot of us grew watching fairy tale princesses and happily ever after. These may later have developed into rom-coms with romantic wedding scenes. Besides, today’s wedding scene – pun intended – is all about the bride. The bulk of the budget is spent on her dress, cake, bridal party, and entourage. She makes most of the decisions with the groom’s mum dying to chip in.

So with modern weddings becoming such a bride-centric thing, it can be easy to forget how anti-women the original wedding was. It was often a business transaction to seal mergers between families. In some cases, the bride’s family paid a dowry of cash and land to seal her marriage.

In others, the bride was ‘exchanged’ or ‘sold’ for property. In either case, it wasn’t at all romantic. So as we dig into the history of wedding rings, we’ll leave out some of its darker heritage and focus on the positive side that comes after the 15th century or thereabouts …

Today, we think of these traditions as punitive and opportunistic, because that’s what they’ve become. In reality, the land, cash, and livestock were intended to help the couple. Domestic animals would help them establish their new household and the other property would help them feed and raise their young family. It’s only when it got commercialized that things turned dark.

Fact 2. The Wedding Ring Wasn’t Part of the Exchange

In this sense, because the dowry and/or bride price were about basic needs and livelihood, the wedding ring was never part of the bargain. Instead, the couple and their families may swap food items, clothing, dried grain, beddings, and the like. Some families would even exchange servants and female siblings. But the ring was a separate gift intended for the bride.

During World Wars I and II, soldiers were drafted and didn’t wear any jewelry. So for many of them, their wedding band was both an identity marker and a reminder of home. Some young soldiers would marry just before deployment, so their wedding rings had so much more meaning. After the wars, it was far more common for western men to wear wedding bands.

Fact 4. These Wartime Rings Were Skinnier 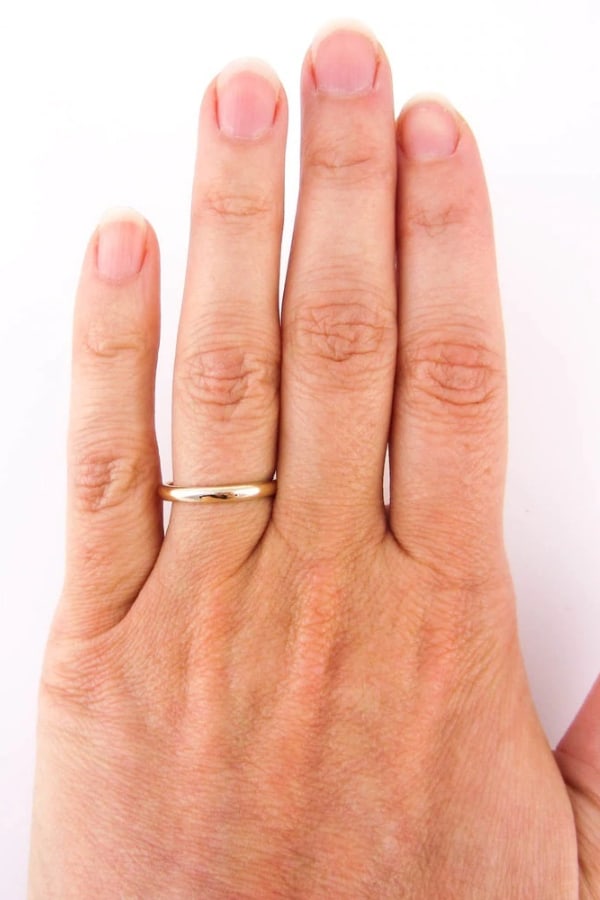 Everything was rationed during the war, from labor to consumer goods. Naturally, gold was in short supply. So the wedding rings forged over this period were low-end utility rings. You were only allowed to mint two-pennyweight rings at most. They weighed about 3 grams and were 9-carat rings (as opposed to the usual 22-carat versions). They were often stamped ( ) to mean ‘u’.

When you’re budgeting for wedding rings, you often include the cost of an engagement rings as well – it’s considered part of the package. But for modern marriages, you might have to factor in the cost of other trinkets as well. Her push present is likely to be a diamond ring. You may have to reset her wedding or engagement rings at some point, and don’t forget key anniversaries …

In Ancient Egyptian tradition, wedding rings were worn by the bride. The ring was placed on her left ring finger because of her ‘Vena Amoris’. This ‘lover’s vein’ was believed to lead straight to her heart, so it seemed like a logical symbol for marriage. Its presence was later disproved (all veins lead to the heart, duh!) but the tradition stuck around for many more years.

Fact 7. The Latter-Day Left Hand was a Protest

By … yes … protestants. Specifically, Thomas Cranmer, who wrote the Book of Common Prayer. At some point, many Catholics and Greek Orthodox members moved their wedding rings to their right hand. But the good bishop (1533 to 1556) suggested they switch back as one of their symbolic rituals to distance themselves from the church they had just divorced, pun intended.

Historically, Ancient Egypt is the first place we see evidence of wedding rings, bit these rings weren’t originally metal. Egyptian wedding rings were first woven from braided hemp or other reeds. Romans are believed to have introduced iron wedding rings for their brides, though it depended on the type of wedding – the Romans had three different kinds of nuptial deals.

The reason wedding rings became more popular than – say – wedding necklaces or earrings is the symbolism. The circle is unbreakable and is a symbol of an eternal bond. So whether the ring meant to indicate the joining of two families of the cementing of a business empire, it was meant to be never-ending. This idea is reinforced through modern-day gem-encrusted eternity bands.

Fact 10. The Hole is a Gateway

While the endless circle on the outside of the ring is about eternity, the hole in the center of the ring is all about beginnings. It symbolizes the entryway created by this union, whether it was a business arrangement or a more affectionate one. (Love marriages are a modern invention, so that’s unlikely.) In Ancient Egypt, gateways were spiritual, so weddings weren’t just physical. 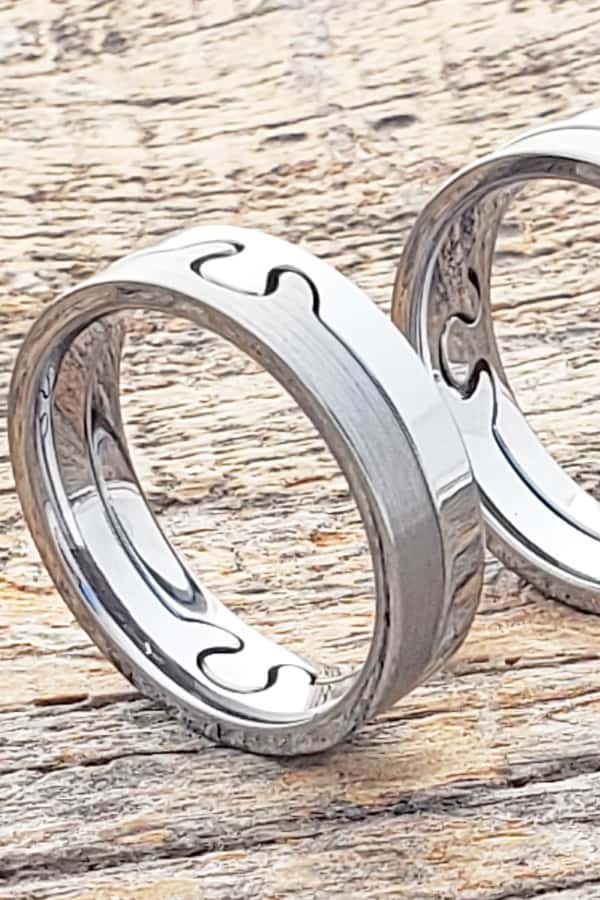 Today’s brides often want a wedding ring that clicks into her engagement ring, forming a cohesive whole. Puzzle rings were common in the Middle East. They were interlinked and you had to rearrange them to form the right pattern. Gimmal rings are another popular selection. Don’t confuse them with Claddagh rings though – the latter don’t usually pull apart …

Fact 12. Men’s Rings Can Be Elaborate

Historically, it was wives who wore wedding rings. But as the men started to wear them too, these rings went into two extremes. They could be super-simple – a plain wedding band that didn’t dim his masculinity. They could be a gimmal ring that he wears during the engagement but gives the bride during their vows. Or it could be a trio ring that matches his bride’s pair.

Among lower classes and early pilgrims, modesty was a big value. That plus cash was hard to come by, So many grooms gave their wives thimbles as an engagement gift or wedding ring. The bride might then snip the top off the thimble to make a ring. If the groom was a bit better off, he might buy her a poesy ring – a simple gold band with meaningful poetry engraved on it.

Whether you’re a same-sex couple or you prefer to be committed partners without a government document, many modern life partnerships have a twist. And their rings express these changes in the couple’s lifestyle. So some couples may opt for a commitment ring. Or a two-bride / two-groom couple may want something less princess-y like a Maleficient Ring or Snow Queen Ring.

While many modern weddings take place in a church – even for couples that aren’t religious – the wedding ring was initially a pagan symbol that got co-opted into the church. Brides in other religions may wear their ring elsewhere. Jewish brides often wear it on their right index finger, for example. But most modern coupled wear rings the usual way – left ring finger for both.

Fact 16. The Simplicity is Intentional

Initially ‘wedding rings’ were given during betrothal or engagement. The only appeared in wedding ceremonies around 860AD. And because these earlier wedding rings were elaborately carved and engraved, the more kosher wedding band was designed to be plain, simple, and unadorned, the yellow gold band of today. But few people settle for that boring old style.

It may seem strange someone would risk-taking an expensive or valuable ring outdoors or to the beach. But it does happen. And ring finders have recovered over 300 rings and other bits of jewelry from sandy shores, grassy knolls, and ocean floors. Still, if your ring is worth $1,000 or more, consider getting it insured in case that metal detector fails you …

Today’s couples are putting more thought into their wedding rings. So they might choose gemstones that are sustainably mined to be kinder to the environment. Or they may opt for synthetic gemstones that use renewable fuel sources. Even when they buy metal rings, they buy platinum, tungsten, titanium. These are hypoallergenic metals with fewer health implications.

Some couples never remove their wedding rings. Others take them off to wash dishes or shake hands. Either way, if your wedding ring has a stone or engravings, clean it at home once a week and have it professionally cleaned using ultrasonic tools at a jewelry store once or twice a year.

Do you and your spouse (both) wear wedding bands? Show us your rings in the comments! 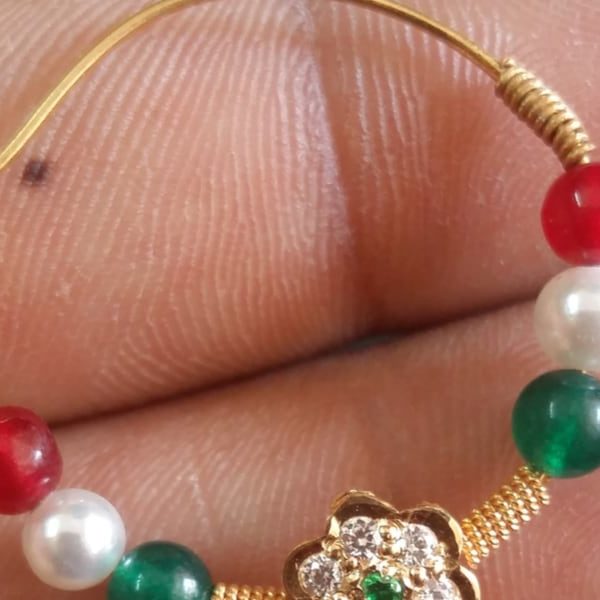 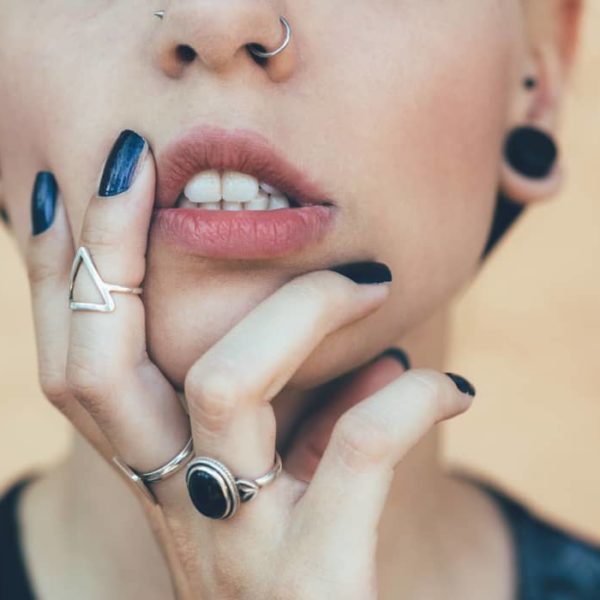 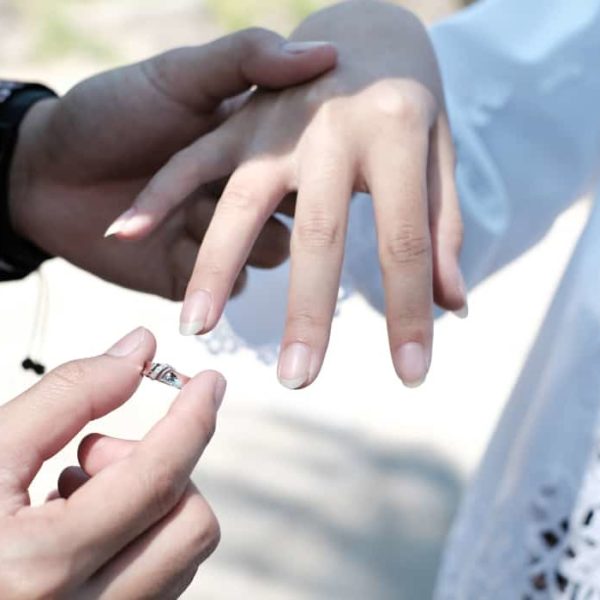 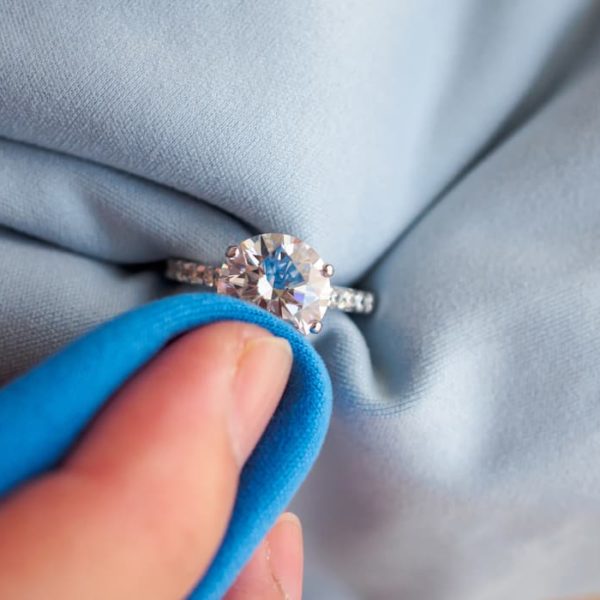